I have participated in many rituals in my time. I also believe that ritual is innate in our beings and that rites of passage are a necessity, to delineate roles and responsibilities, to mark the passage of time and to welcome the individual into each new life stage.

I chose the archetype of Clown because the clown is vulnerable, the Clown exposes their shame to the world with an invitation to be seen.In that vulnerability there is infinite power.

My process towards becoming this Shamanic Clown, a spiritual path as much as it is a character, has been a practice of asking and receiving without expectation of the results. Spirit often sends messages, signs and signals, but rarely the one I ask for and the surprise of manifestation is very Clown. 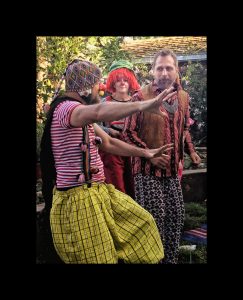 The Shamanic Clown initiation ritual was no different. I believed initially that I was to find a traditional practice, would commit to that and all would be good. The introspection I did in preparing led me to address old and rooted shame – The Shame Mango. The practice of Clowning, the character and embodiment of it, is a trance experience of “becoming someone or something else. Ritual is often like this, allowing us to connect to Spirit, to community and to ourselves in an intimately sacred way.

While I continue to learn the lessons of this initiation ritual, the moment of becoming, “taking the new role” so to speak, has been richer than I could have imagined and has given me energy to grow into my new rights and responsibilities.

May the Universe play pleasant tricks on you,